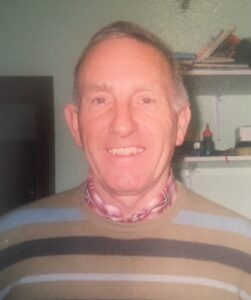 William Cunningham was born in 1946. He grew up near Crossgar, Co.Down and went to University at Queen’s, York and London. Up until 1978, he letcured for several years; then he had his first exhibition at the Cromie Gallery, after which he decided to go professional.
Apart from school, William recieved no formal artistic training; he is largely self-taught. He has painted from a very early age and was influenced over the years by painters such as McKelvey, Craig and Carr. His success may be explained in his quest to capture the vibrant colours of cornfields and poppies, sunsets and sails, and of moonlight and lillies. His skill at painting water- with its light and many reflections has always drawn admiration. William has never felt that he has arrived, he is always striving to do better, to be more vigorous and lively with his colour, to keep developing and changing approaches; in one word, to one day attain the perfect.
Over the past twenty years, William has had many exhibitions. He has exhibited in the Tom Cromie Gallery, The Oriel (Dublin), Combridges (Dublin), The Eakin Gallery and many others. In 1996 Felix Rosenstiel’s, one of the world’s leading art publishers, released four of William’s paintings in print form. Established since 1880, Rosenstiel’s exports to over one hundred countries, so the potential for international sucess is great.
During 1997, Noel Tatt Ltd, released a series of cards, displaying his paintingsand in 1998 The Oisin Gallery (Dublin) released more prints of his work in card and calender form.
As he paints, he keeps in mind what Tom Carr once said to him “Art must be simple but profound.”