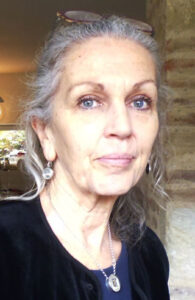 Stef Callaghan was born in Malaysia in 1954, one of five children. As a child she travelled all over the world attending 13 different schools! Stef emigrated to Australia where she met her Artist husband, George and they raised five children. Stef studied Hotel Management and Cooking in Hobart, Tasmania and also worked in the State Library Foreign Language Department for 15 years. Stef studied Art at the Hobart Matriculation College. Continued her painting studies privately.
She has run concert venues and a wine and bistro cafe bar in her Art studio in Hobart, and has run her own gallery and has produced a series of cards and prints.
Her work is in numerous private collections throughout Australia and overseas.
Music, farming, cooking, travel, coffee and daughters have dominated her life and these observances are translated onto canvas.
The work is acrylic and oil and canvas.
Stef also is an Archer and she and George participate in numerous Field Archery events around England and now in France where she now lives and is currently working on a cookbook.
Stefs hopes that her work reflects a joy in everyday life and explores the interactions between people as they go about their daily pursuits.
Above all she hopes that the paintings make you smile!
Stefs work can be seen at Eakin Gallery, Belfast, Upfront Gallery in the Lake District and Kenny’s Gallery, Galway.