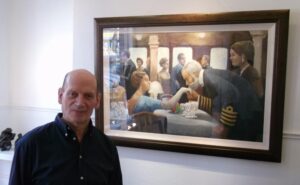 Jim McDonald was born in Belfast and is a third generation Harland & Wolff worker. He started his apprenticeship in 1954 at the age of 15 before becoming a fitter.He then qualified as a design draughtsman in the diesel drawing office. His paintings are in collections in U.S.A., Canada , France, Dubai, Australia, U.K. and Ireland

Two of his paintings were selected by the Royal Mail in 2007 for a limited edition of first class stamps.

During his professional career, Jim worked in Canada, England, and Ireland. A three year period in Counties Kildare, Cork and Waterford saw his love of horses produce delightful horse racing scenes that are still sought by many enthusiasts of the sport. When he returned to Northern Ireland he worked for a period in the Delorean factory as the illustrator for the car service manual before devoting himself to painting full time. While in Canada, Jim was commissioned to paint a portrait of The Governor General of Canada. This in turn led to a series of portraits of other well known personalities. Following a presentation of a painting of Belfast City Hall to the then Lord Mayor of Belfast, Alex Maskey, who received it on behalf of the people of Belfast, it was subsequently decided to use it for the 2002 Lord Mayor’s Christmas card. More recently, another of Jim’s paintings was presented to the British Ambassador of the Phillipines, the Hon. Paul Dimond in Manila. Jim’s paintings have always been popular, from his early watercolours and pastels to the bold and colourful oils he works with today. Notable influences are McAuley, Conor, Yeats and Turner, to name a few, but he is constantly experimenting, and his current project displays a trend towards even more colourful and fascinating subjects. Jim’s work is very collectable, and many discerning collectors are delighted to possess one or more of his paintings.