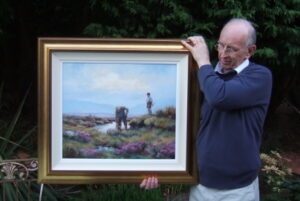 Hamilton Sloan has spent most of his life in Comber, Co Down. During the past twenty years, he has concentrated mostly on watercolour landscapes and is much admired for the delicacy of touch with which these are executed. A number of years ago he moved to Gweedore, Co Donegal to live and the wonderful scenery and superb lighting has influenced his work tremendously. His move to Donegal also coincided with an experimentation in Oil Painting which has evolved into one of the most admired styles in Irish painting today, and during the past few seasons he has produced paintings which have captured fully the essence of the Donegal area. Turf cutting, fishing and beach scenes are among the subjects which he has captured with a powerful authenticity. Hamilton has now returned to the Antrim Coast to live and paint but his love of Donegal continues to show in his work. Hamilton Sloan says “For some time now I have been producing paintings inspired by the area around Gweedore, Co Donegal. I have tried to capture on canvas the feel of the light, scenery and people of West Donegal. Few other places in the world offer the abundance of colour and texture that can be found in the Irish landscape.” Hamilton Sloan has exhibited successfully in major art galleries in Ireland, the United Kingdom, America and Japan. His work is in the private collections of many of Ireland’s best known people including two former Prime Ministers of the Republic of Ireland, as well as in public collections such as the Department of Finance and Personnel. Hamilton’s body of work is regarded as one of the best contemporary representations of the lifestyles and landscapes of Ireland and its coastlines.