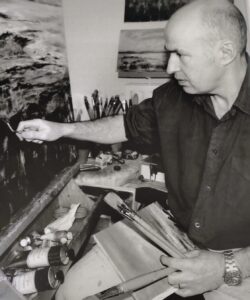 Gerard Maguire is a Belfast artist (born in 1963) and has exhibited throughout Ireland for the last 25 years. He had his first solo exhibition in the Charles Gilmore Gallery, Holywood, Co.Down in March 2003 and this was followed by a ‘New Works’ exhibition in that gallery in September 2004.
Maguire has also shown in numerous group shows including with The Eakin Gallery and Townhouse Gallery in Belfast, The Solomon Gallery and The Leinster Gallery in Dublin; The Clifden Gallery, Connemara and The Sheep Chandler Gallery, Roundstone, Co.Mayo; The Private Collector Gallery, Inishannon, Co. Cork. He also exhibited at the Emerging Art Exhibitions at The Waterfront Hall, Belfast from 1999-2002.
Maguire was a regional and London finalist in the National Laing Art Competition in 1998 and has work in the Department of Regional Developments Collection and Law Society of NI. More recently he has exhibited in the Royal Ulster Academy and at the Boyle Festival on a number of occasions.

“Although he has only been exhibiting for 7 years he is perhaps one of the names to look out for rough seas, wild skies, sandy shores and endless moods – lovely stuff.”
Elizabeth Baird – Art Critic, Belfast Telegraph
“He does not paint directly from the landscape itself or from photographs, rather from memory, and allows the picture to evolve without any predetermined plans”
Energy is also conveyed in the brushwork, the heavy impasto. These are colours that are used to effect in the landscape of Jack Yeats and later in those of McSweeney.” Dickon Hall – Art Historian & Curator