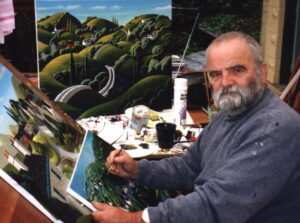 George Callaghan was born in County Antrim, N.Ireland in 1941, attending Carr’s Glen Primary School up the Old Park Road. At the age of four his family emigrated to South Africa where he was educated in the ways of apartheid. He also became the “Western Province Boxing Champion” (Gnat weight division). At the age of 14 the impending death of his Grandfather forced the family to return to Belfast, throwing him in the deep end of sectarianism.
George attended Ashfield Secondary Intermediate (technical section) where he attained 9 distinctions in his junior certificate. Desmond Kinney, his Art Teacher managed to get George 13 periods of Art a week. He left school at 15 to work at Nicholson and Bass (printers and box makers, Alfred Street) as an apprentice Commercial Artist under Robin Holmes. A year later he commenced studying Art at the Belfast College of Art on a Scholarship and studied painting with John Luke, Romeo Toogood and Tom Carr (returning to Nicholson and Bass to work during the summer vacations).
George started work in Dublin as a junior designer with Janus Advertising Agency and 8 months later moved to Kenny’s Advertising Agency as a senior designer. He then moved to London as a designer, 8 months later he emigrated to Sydney, Australia. For a year he worked as a senior designer at McCann Erickson then moved to Leo Burnetts where he stayed for the next 11 years as an Art Director.
Advertising burnt him out at the age of 32, he then moved to the Australian Island State of Tasmania where he has lived for the last 27 years. In this time he has been recognised as one of the States leading Artists. He also enjoys the reputation of being Australia’s leading Harp maker and a leading exponent of the Celtic Harp, he produced the states first Stirling silver Jewellery Exhibition. The recordings of his harp music include – ‘Traditional Airs’, ‘Rhyme and Reason’, ‘Another Fall of Rain’, ‘Garden of Tranquility’, ‘Georgeian’ and ‘Cold Dark Night’. In the 70’s he was part of a vocal group that recorded for Festival Records. George has also made four animated short movies for television.
From Australia George moved to England in the Lake District for five years, which gave him the opportunity to pursue his interest in Field Archery. George is now living in France. He returns regularly to Ireland to sketch and renew friendships and to keep in touch with Galleries that show his work.