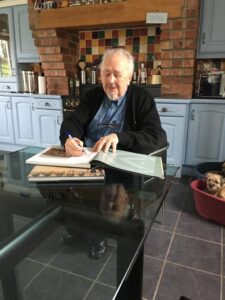 Born in Lurgan in 1930, Maguire graduated from the Queen’s University Belfast in 1951. He then took an English teaching post at Lurgan College. He became a member of the Royal Ulster Academy in 1974, winning both the Silver Medal (1964, 1967) and the Gold Medal there (1993). In 1971 he began exhibiting at the Royal Hibernian Academy in Dublin and between 1982 and 1992 he exhibited at the Oriel Gallery in Dublin in a series of solo exhibitions. In 1981 he retired from teaching at Lurgan College to concentrate on painting and travelling.

Maguire divided his time between Italy, Belfast and the West of Ireland but lived and worked for a great part of the year in Roundstone, Connemara – an area that has always been the inspiration for much of his work. Maguire died in May 2020 at the age of 90.