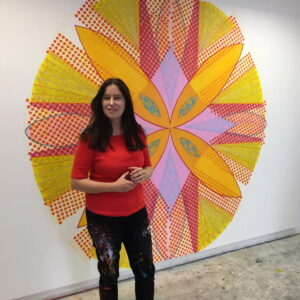 Born in Castlereagh, Catherine Davison received her BA honours in Fine Art from the University of Ulster in 2001 and completed a postgraduate course at Leith School of Art, Edinburgh 2005. Since graduating Davison has been a member of Queen Street Studios in Belfast and has received a number of awards from the N.I. Arts Council through the individual artist award program.

Over the years Davison has taken part in a variety of group shows from Cork to New York and with each solo exhibition her practice has grown.

In 2015, Davison received support from the British Council through their International Residency Program Award to be an artist in residence at Largo das Artes for one month in Rio de Janeiro. This experience has influenced and formed the basis of her current work.

Inspired by nature my most recent work is influenced by my time in Brazil. In 2015 I spent one month in Rio de Janiero as an artist in residence at Largo das Artes. During this time I explored the city‘s eclectic mix of architecture, contrasted by its natural environment.

The Cathedral of Saint Sebastian made a lasting impression – with its stained glass windows souring 65 metres high. On my return to Belfast I began creating work with an emphasis on colour and form. These paintings are a result of this time.

“I have adopted the motif of the chestnut leaf through simplified line drawing;- using paper-cuts as templates to create the leaf compositions whilst adapting screen printing techniques to create depth by layering transparent colours with Brazilian fabric patterns in varying hues”.