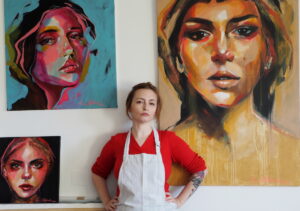 Anna Matykiewicz was born in Poland, moved to Ireland in 2003. While living in Ireland she completed B.A. Degree from Visual Communication in 2005 in Poznan, Poland but remained in Ireland where she currently resides. In 2013 she left corporate work to fully pursue her career in art. Prior to this she was working in many diverse areas, not related with art.
She is mostly focusing on exhibiting and promoting her artworks through the internet.

Her artworks are in private collections across the world in such countries as Australia, United States, France, Germany, South Africa, Ireland, Spain, Italy, Greece, Switzerland.