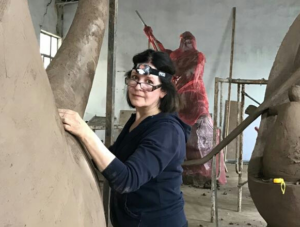 Ana Duncan lives in Dublin and works with bronze, ceramic and concrete. She has exhibited throughout Ireland, in Scotland, London, New York, Britany and has participated in many group exhibitions including the Royal Hibernian Academy, the Royal Ulster Academy, Oireachtas, Claremorris Open, Boyle Arts Festival and Sculpture in Context at the National Botanic Gardens, Dublin. She has shown with many galleries including the Solomon Gallery Dublin, Hallward Gallery Dublin, Mill Cove Gallery, Castletownbere, the Lost Gallery, Scotland and the Greenlane Galleries in Dingle and Paris.

Her work is represented in many collections including Allied Irish Banks, Bank of Ireland, International Financial Services Centre, the Morrison Hotel, and the Department of Environment Northern Ireland. In 2004 she completed a commission for Tallaght Hospital in Dublin. Her work is also in private collections in USA, UK, Sweden, Spain, Portugal and Ireland. She is a member of Visual Artists Ireland (formerly Sculptors Society of Ireland) and a member of the Organising Committee of Sculpture in Context.

For Ana Duncan sculpture is a duet between sculptor and her medium. Over the years Duncan has assumed a seminally important role in the Irish Woman’s Sculpture Movement. The moulded, fluid surfaces of her work and the vibrant play of light and shadow marks her as a contemporary of Modernism. Once considered a neglected art and defined by a male province, Ana Duncan’s work silently breaks boundaries, unconsciously providing us with both tenacious and challenging forms. Her work conjures up a plethora of images, philosophies and ideas. Whilst others struggle with controversial media and jettison traditional techniques Ana Duncan holds steadfast.

Working in clay she pares back the female figure to its essential elements. Her medium dictates the form. It is only later through observation of the habitual where the mood, expression or body language of a particular form instructs the physical rhetoric of the final piece. Duncan could be described as an heir and executor of the Romantic Movement. She readily channels the pathos and passion of the Golden Age of the Irish sculptural movement, pushing it into 21st century terms. This is wonderfully refreshing. She makes moulds and then creates wax copies from the moulds. This permits control over the piece until the casting stage. The wax is taken into the foundry where it is finally cast in bronze. As a portrayer of human form, Duncan transports her traditional methodology into a modern approach via the realms of psychological subtlety. Germination is the alpha and omega of her oeuvre. This is a vision and metaphor for the cyclical nature of life. With possibilities for biblical or feminist undertones, the piece should be perceived through the compliment of juxtaposing forms as the embodiment of Mother Nature. Germination; the budding, blossoming, growth and fusion of all life. From seed – life begins! What extraordinary richness there is in this simplicity not only of form but of theme! The voluptuousness of the form and use of lithe lines recalls the influence of Henry Moore. This sculpture appears to soar higher, stretching upwards and outwards yet still retaining the aspect of plant like growth. The base of the piece plays an essential part in its structural rhythm. Within a social contemporary context this piece speaks volumes. The touchstone of Ana Duncan’s work remains the female form. Her distinctively dialectic handling of gravity and elevation at times look to angular forms or cubic proportions. This serves as a means to emphasise the action of the piece such as the contemplation of Memories, the sinuous movements of the body in Stretch, or the sense of propriety of Seated Figure. This cutting and reducing of figures to a more cuboid form whose stereo metric ideal is reminiscent in ancient Egyptian Block Statues. Yet her exploration of concave and convex forms echoes the Art Deco undertones of Picasso’s classical sculpture.

Duncan’s use of soft undulating line and personalised approach also takes on blithe or entertaining scenarios seen in work such as Figure with Umbrella. Tinged with irony and flavoured with humour, this female figure clutches a tiny bronze umbrella, in a vain attempt to protect her voluptuous form from the onslaughts of a rainy day. The wonderful nature of this piece is that the figure is completely oblivious of the fact, lost in some moment to herself. This friviolous, if untimely gentle humour reflects the work of Fernando Botero, another artist whose work inspires, albeit Duncan transcribes his ideas within a more refined context. Recently Ana Duncan has worked directly in concrete. This is an immediate process where she created a welded steel and wire mesh structure. This reinforced the structure, to which she then ‘buttered’ on the concrete. She has just finished a life-size piece, which was on show in September last at the National Botanic Gardens, Dublin. Her collections and a series of distinguished group and solo exhibitions throughout the years have firmly established her within the niche of an original, unique talent who works within a modernist framework. One can only wait with baited breath for the next piece from her studio!