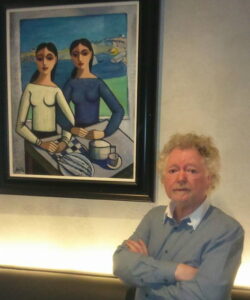 Alan Quigley was born in Drumbeg on the outskirts of Belfast in 1950. At primary school his artistic ability soon came to the fore and on leaving school he trained as a picture framer concentrating on restoration of damaged paintings. After a few months in London at Hammer Studios training as a make-up artist he returned to NI and being an accomplished musician he played guitar with many of the top show bands in the mid 60’s and early 70’s.

While he continued to paint and develop his style during these years, but had no formal training, it was not until a chance meeting with the late and renowned Irish artist, Dan O’Neill in Belfast, that he began to take art seriously. Dan encouraged and influenced him to develop his own individual and varied techniques. It was shortly after Dan’s untimely death in 1974 that Alan decided to concentrate on art. His first exhibition included scenes from his local area from which he drew inspiration; all of which he interpreted in his own unique style.

In the years that followed he had many commissions from hotels, nightclubs and restaurants. One of his murals was a joint venture with the sculptor Tim Shaw from Cornwall whose work adorns a large area of the Eden Project. He also painted and became friends with a number of celebrities including Ian Botham, Chris Rea, Steve Davis, Alex Higgins and Denis Taylor.

During the 1980’s he began to produce his first paintings of nostalgic Irish life using wax crayon and watercolour. Many private and commercial commissions followed. However about 5 years ago after agonising over what direction he wanted to go in, he began to experiment with acrylics using the style Dan O’Neill had taught him over 30 years before.

Within the last two to three years he has begun to feel that he has mastered, to some degree, this very individual style. His paintings captivate Ireland’s romantic past with its characters and landscape beautifully portrayed in vibrant colours.